Rich in history, the Cornwall coastline is scattered with the old remains of a lost past. Mines crumbling into the wild sea, old chapel ruins overlooking hidden bays and cliffs that hold secrets of pirates and buried treasure. This coastline has many old Forts, Burrows and the remains of cliff Castles. Some of our favourite areas for holding our cliff top Elopement and Handfasting Ceremonies are along the remote west coast of Cornwall from St Just to Zennor. Please read our Ancient Sites’s blog post for more inspiration.

Whilst it is not allowed to get married in this castle, it is still a great location for some of your couple photographs or with St Micheal’s Mount in the background for your ceremony. Castle Wedding Cornwall, Castle Wedding 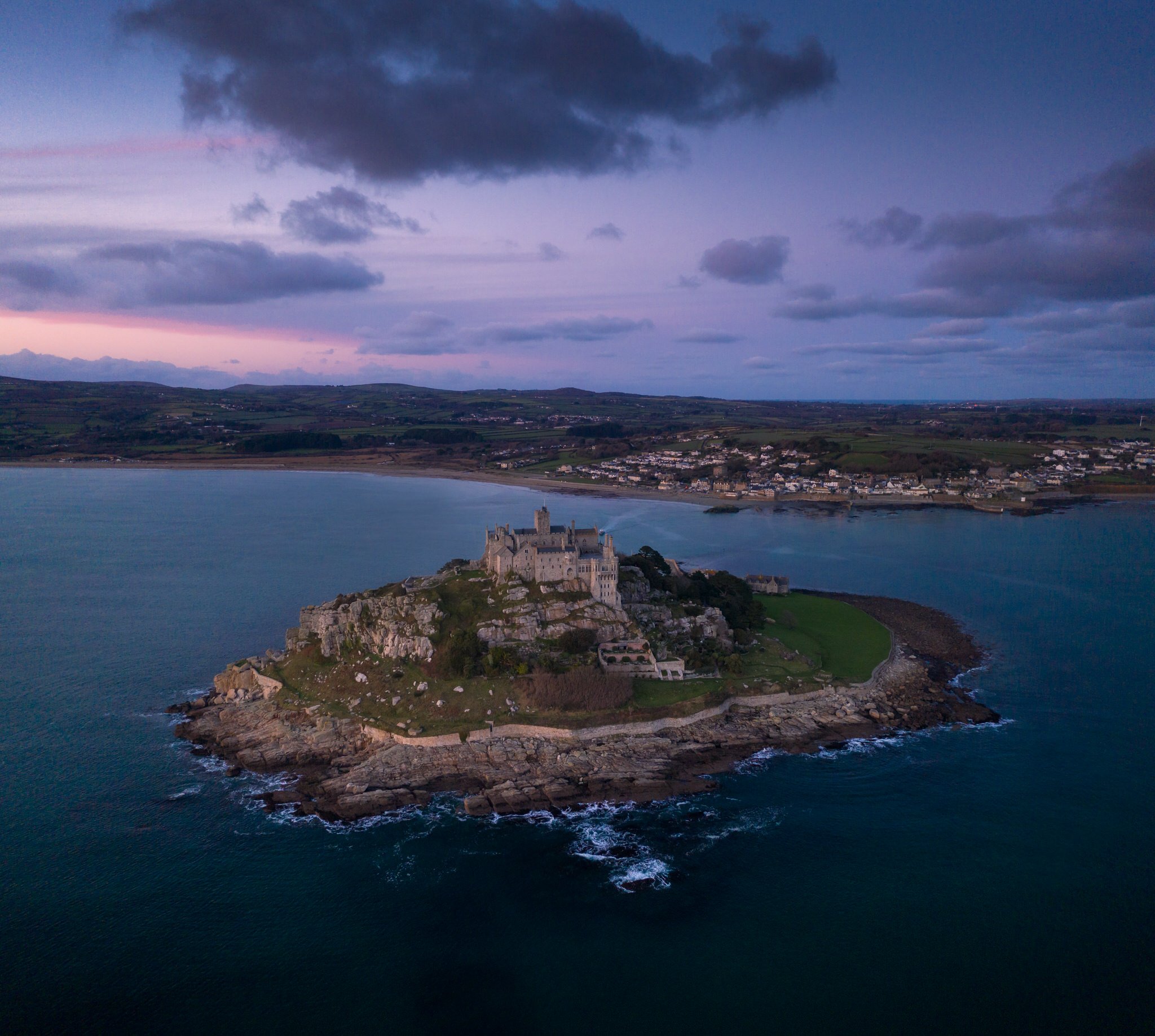 Smuggling has been with us for centuries. Evidence of this notorious trade in Cornwall is everywhere; a simple walk on the beach reveals the caves and manholes in the cliffs that these men used to hide and then transport stolen goods from sea to land. In most coastal towns and villages, there are rumours of hidden passageways and secret tunnels connecting the sea to popular pubs of the area. The fact that our Cornish coastline is so treacherous made it perfect for Wreckers, Pirates and Smugglers to have a steady supply of contraband and items to sell on the black market. wedding

It is estimated that along the coast of Cornwall there have been more than 6000 shipwrecks. This is more than anywhere else in the British Isle. The coastline around the Lizard was historically known as the ‘Graveyard of Ships’. One of the most famous shipwrecks in Cornwall lies between Land’s End and Sennen. The ‘RMS Mulheim’ was wrecked in 2003. Whilst getting onto the shipwreck itself is tricky as it involves a climb down a steep path and a maze of rusty metal it can make for a cool backdrop for the more adventurous couples. This photo is of a couple that came all the way from America who now have some amazing pictures with the shipwreck as a unique backdrop in their Elopement Photographs. 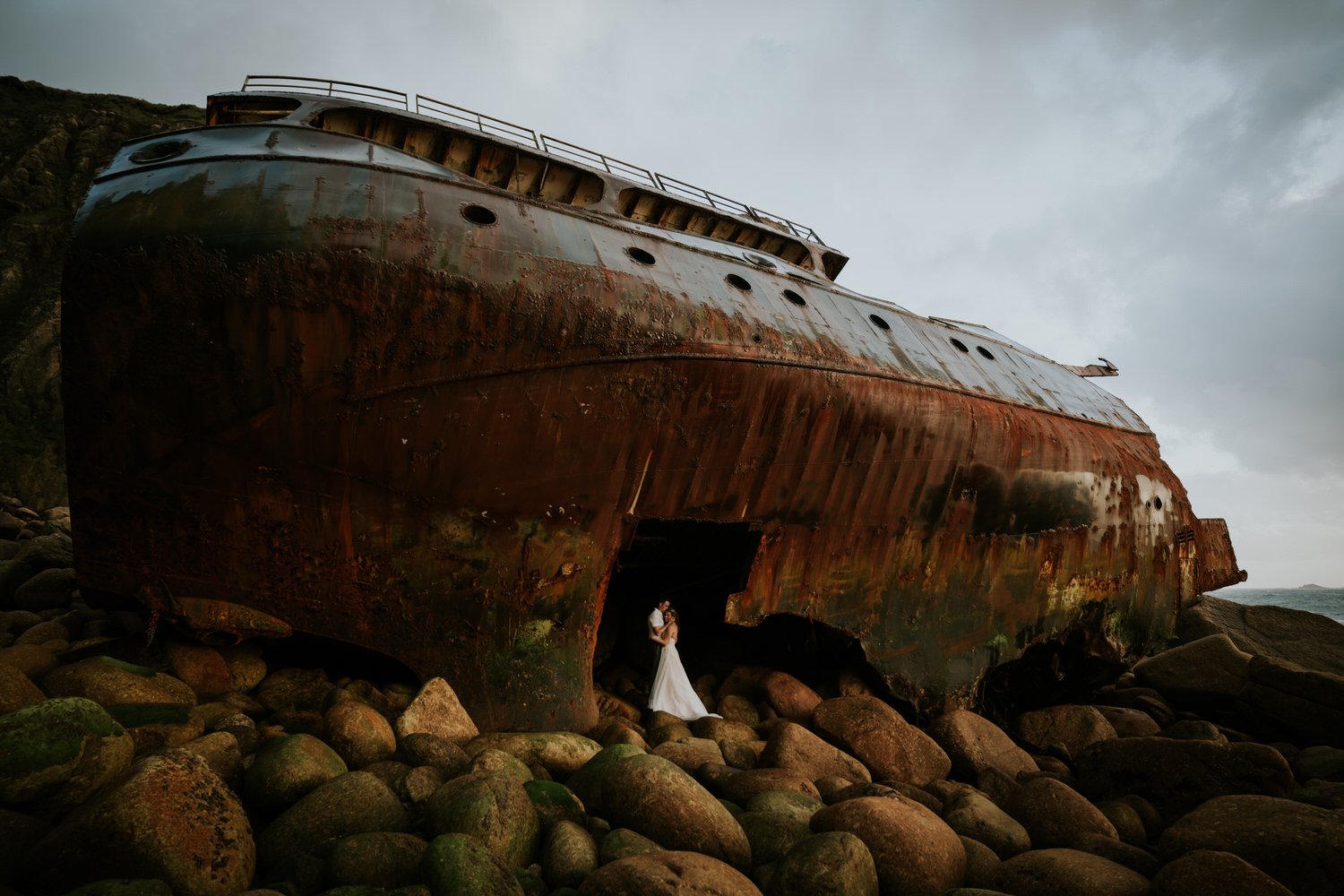 There are many popular and well known mines which provide a unique and unexpected option for your Intimate Elopement or Handfasting Ceremony. Wheal Coates Mine in St Agnes, covered by heather and gorse, The Crown Mines in Botallack, that appeared in the well known series of Poldark and Wheal Prosper in Rinsey which is popular for photographing the milky way, make for great backdrops for your wedding ceremony or for your couple shoot. We prefer to recommend mines that are slightly less popular and off the beaten track during the summer months as they get very busy. Some mines are sheltered so are a good option for an outdoor ceremony if rain is forecast. The cliffs and coastline along the South West of Cornwall are really beautiful and dramatic for your ceremony. 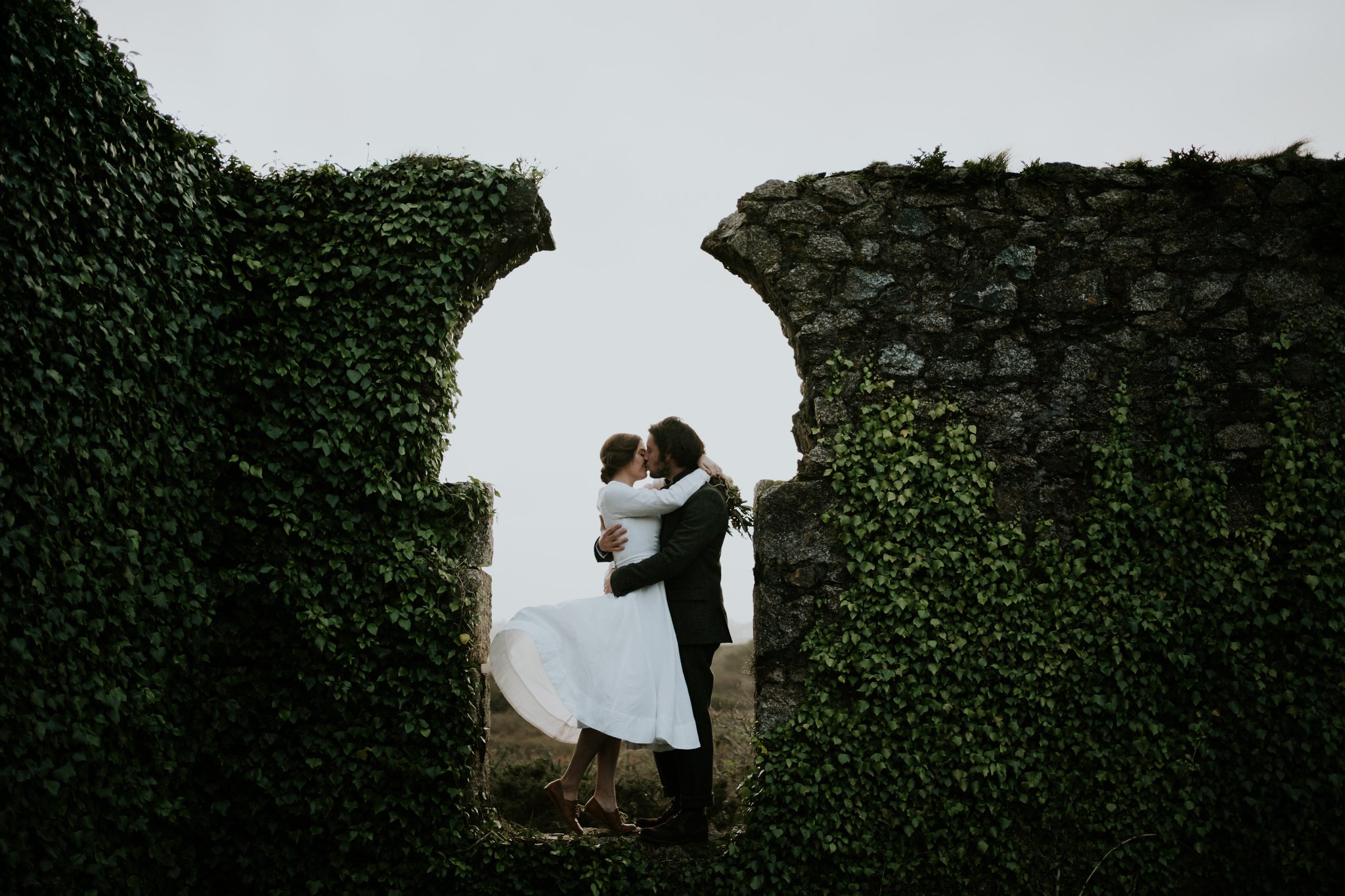 Carn Galver cliffs are popular with rock climbers as they are so high and tumble into the clear blue waters below. There is a big plateau on top making it a perfect place for taking in the view of the cliffs and the sea.

Zennor has a beautiful yet rugged landscape with an earthy colour palette. Green and yellow lichen covers the pale blue rocks, the long soft brown grass covers the cliffs down to the black rocky beaches below where the wild waves crash in. There are many great view points for your ceremony.

Bedruthan Steps near Newquay is a popular choice on the north coast where huge sea stacks dot the beach and make for one of the most dramatic locations. Unfortunately due to a landslide the beach is no longer accessible at this point but can be assessed further along at low tide. It is still perfect for a cliff top location with a dramatic view. Kynance Cove is popular and gets extremely busy in the season but fortunately, we know a few other cliffs which are quiet and you can have the view to yourself. We also recommend a sunrise/sunset Elopement in the busier months if you want to have your Outdoor Wedding Ceremony at one of the more well known viewpoints. 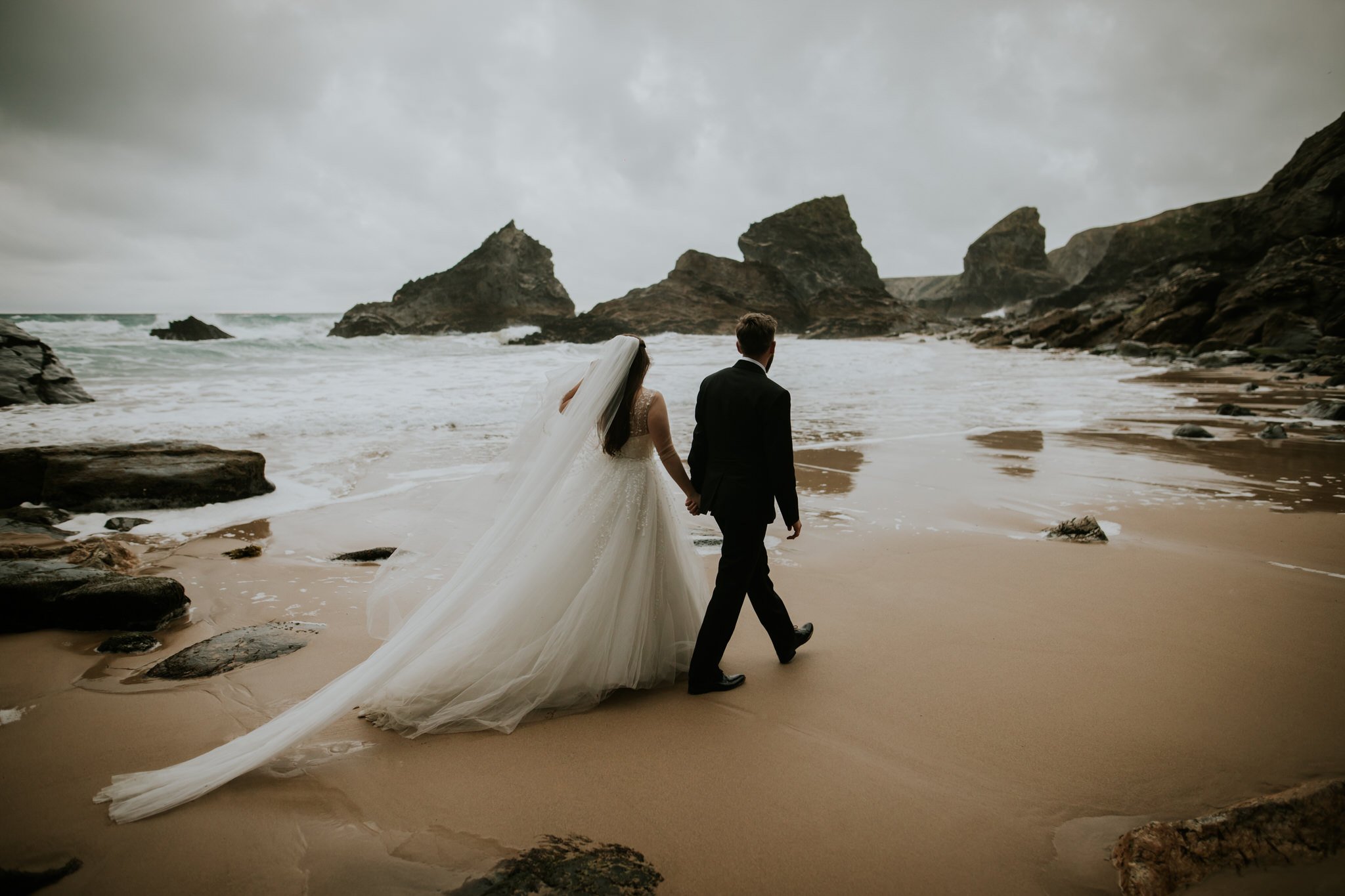 Ruins: for your Castle Wedding in Cornwall:

Immerse yourself in history, myths and stunning scenery at Tintagel Castle set high on Cornwall’s rugged north coast. Tintagel was a stronghold for early medieval rulers. Geoffrey of Monmouth named it as the place where King Arthur was conceived. There are a few quiet places to hold your ceremony, early morning or late evening,out of season.

This ruined 15th-century hermitage is steeped in myth and mystery. The hermitage stands atop a 66-foot-tall tourmaline granite outcrop, looking out over the atmospheric Bodmin Moor and is associated with a number of Cornish folk tales. This does not have a sea view nor does it have the best backdrop onto a housing estate but it does make for a cool little location for couples. A perfect place for your Ruin & Castle Wedding in Cornwall

This is a beautiful backdrop and the cliffs around here are also dramatic. The headland has a prominent chapel, dedicated to St Michael, and is accessible by a steep footpath.

The monument includes a medieval chapel with its associated dwelling and enclosure, situated centrally on a rocky promontory known as Cape Cornwall on the far western coast of Cornwall. We highly recommend the walk to Kenijack castle. 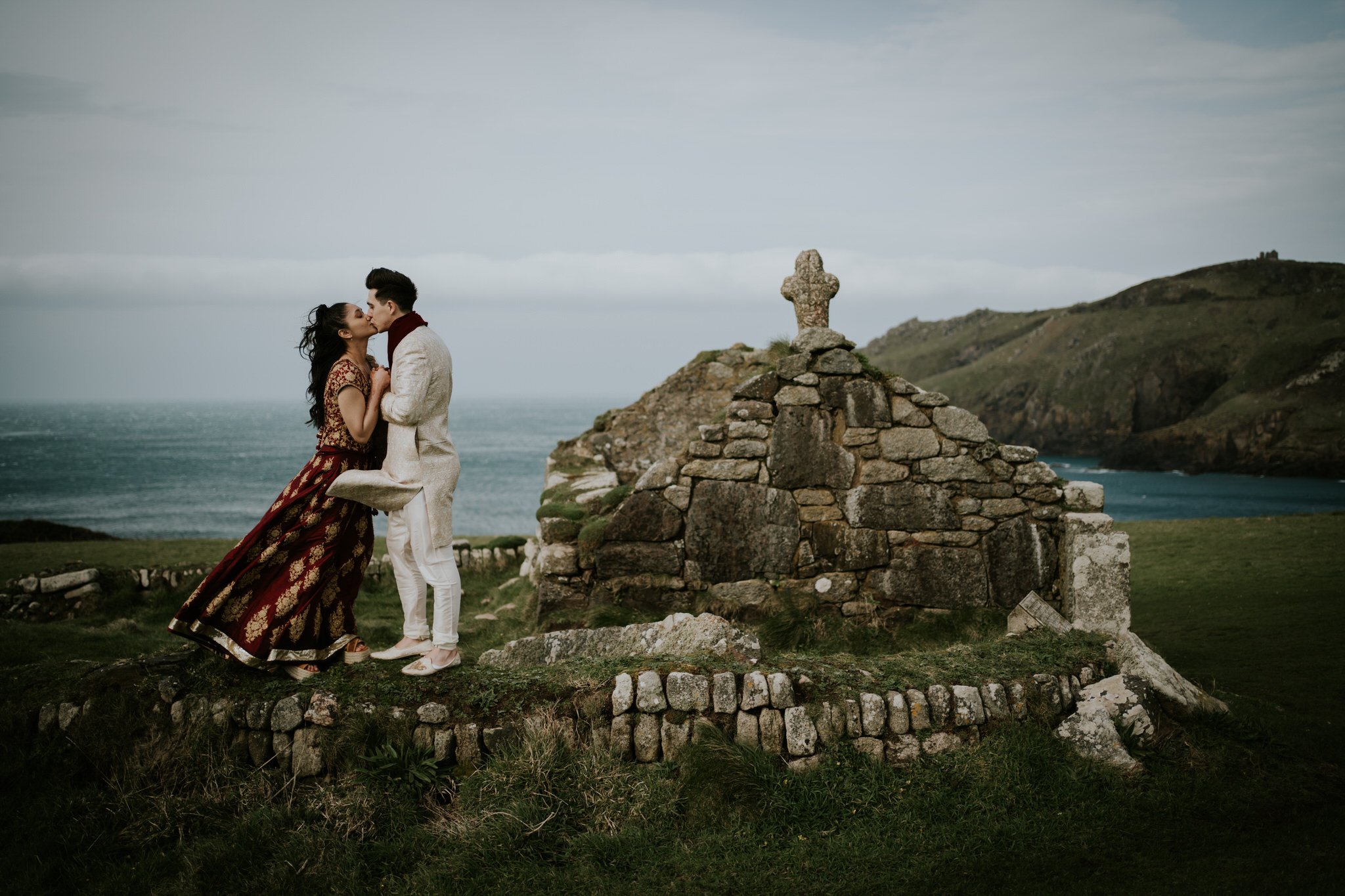 We have mentioned many places in our blog posts but we have lots of favourites which we have chosen to not publish here but will happily share with our couples that book with us. We love to keep some of these spots to ourselves to keep them quiet and perfect for you so you can say your vows, with the most dramatic of backdrops, without the crowds.  castle wedding in Cornwall