How to Choose the location for your Elopement or Handfasting

Stone Circles & Ancient Sites for your Wild Intimate Elopement in Cornwall. We are so fortunate living in a wonderful, wild and natural part of the world. Cornwall is full of ancient mystery and has such a magical landscape which we just love to explore, every moment we can. The remote corner of West Cornwall is definitely our most favourite. It has the highest concentration of ancient sites in Europe: standing stones, stone circles, quoits, barrows, fougus, wells, Bronze Age settlements and hill forts. Some sites are at least 4000 years or more. Here are some of our most favourite sites that we love to conduct and celebrate our Wild Weddings at. We hope you will find your own favourite one to experience your Wild Wedding too!

This is a lovely site to have your Intimate Elopement or Pagan Handfasting Ceremony as it is usually quiet out of season, early mornings and sunsets. Among the best-preserved ancient villages in South West England, Carn Euny was occupied from the Iron Age until late Roman times. It includes the foundations of stone houses from the 2nd to 4th centuries AD, with walls up to a metre high in places. At the heart of the village is its most intriguing feature – a stone-walled underground passage known as a fogou. This mysterious type of Iron Age monument is found only in the far west of Cornwall. 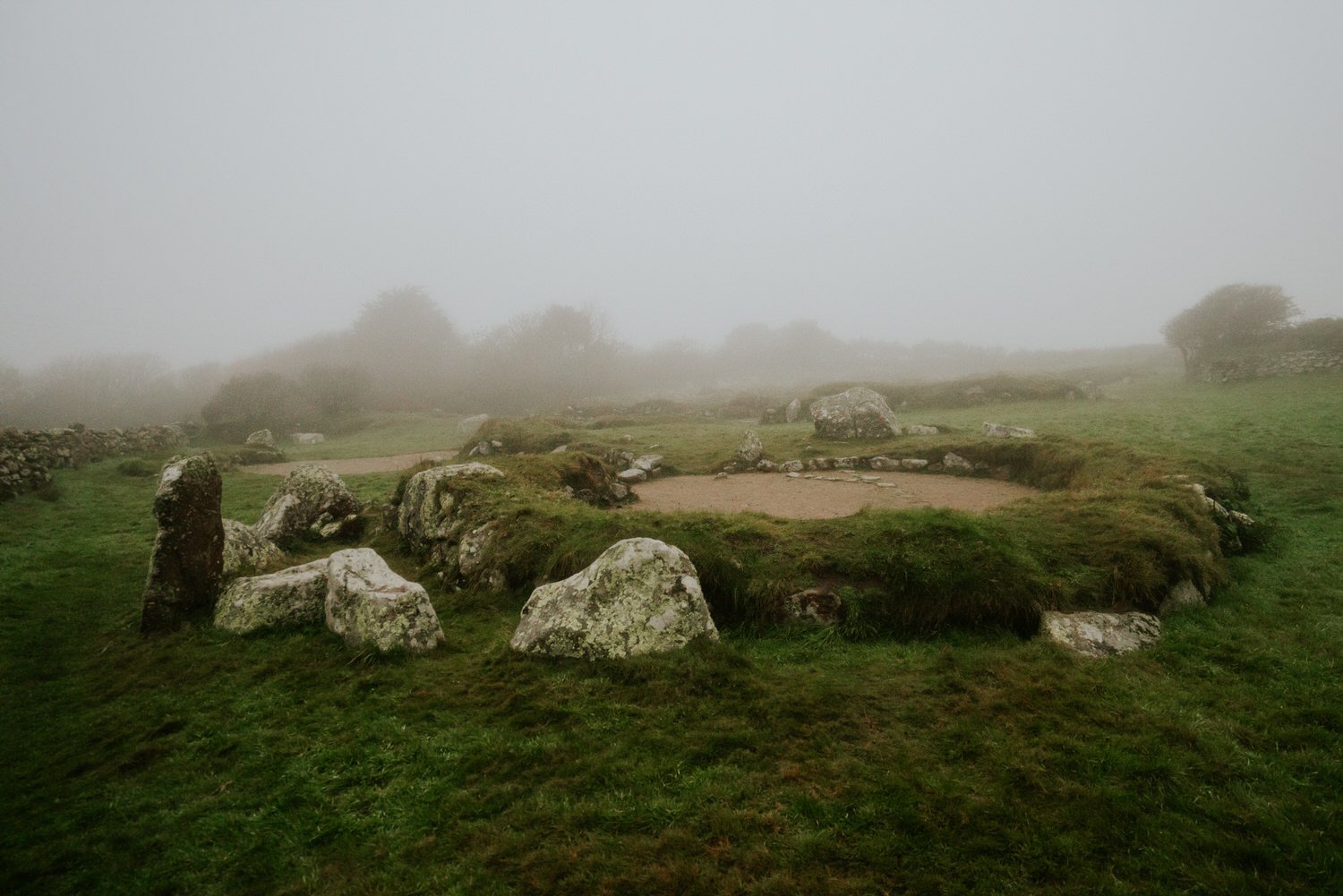 This area is rich with legends of the Otherworld: fairy folk, demons and devils. These stories may be memories of the ancestors and spirits of the dead, for this whole area was formerly covered with prehistoric barrows, burial mounds and megalithic monuments. Tregeseal Circle, along with other stone circles in the area, was a place of ceremony and ritual. This site is a great space for your own wedding ceremony and Handfasting Ritual. 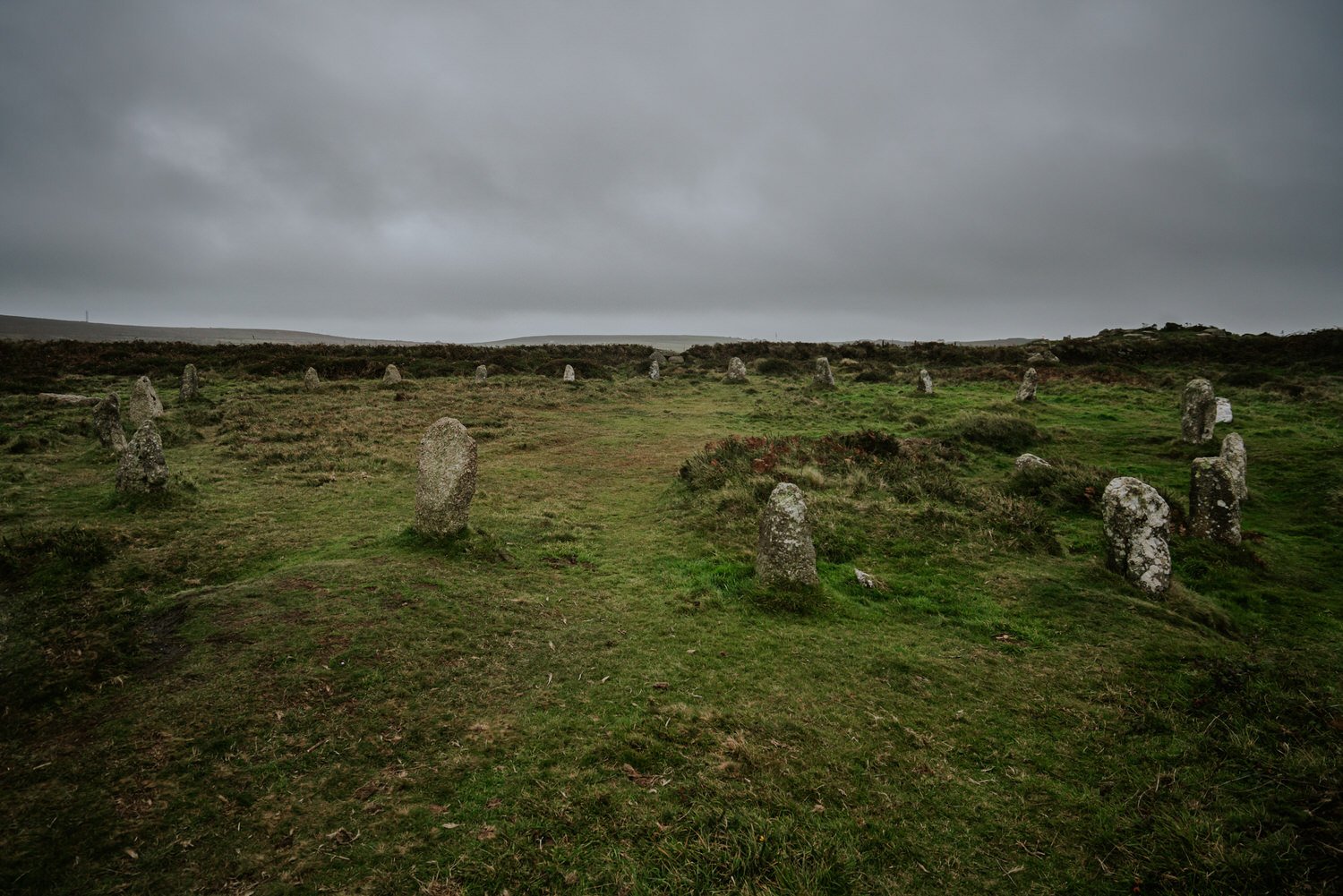 Together with its twin (or triple) circles, it was probably the centre of a whole area of ritual monuments focussed on the distinctive shape of Carn Kenidjack that overlooks the moor. It is known that Carn Kenidjack was a Tor, which means that it was used as a separate sacred area. It was thought of as the dwelling place of the ancestors or the Gods/Goddesses, and there may have been a ceremonial path from the circle(s) to the Tor Enclosure on Carn Kenidjack. 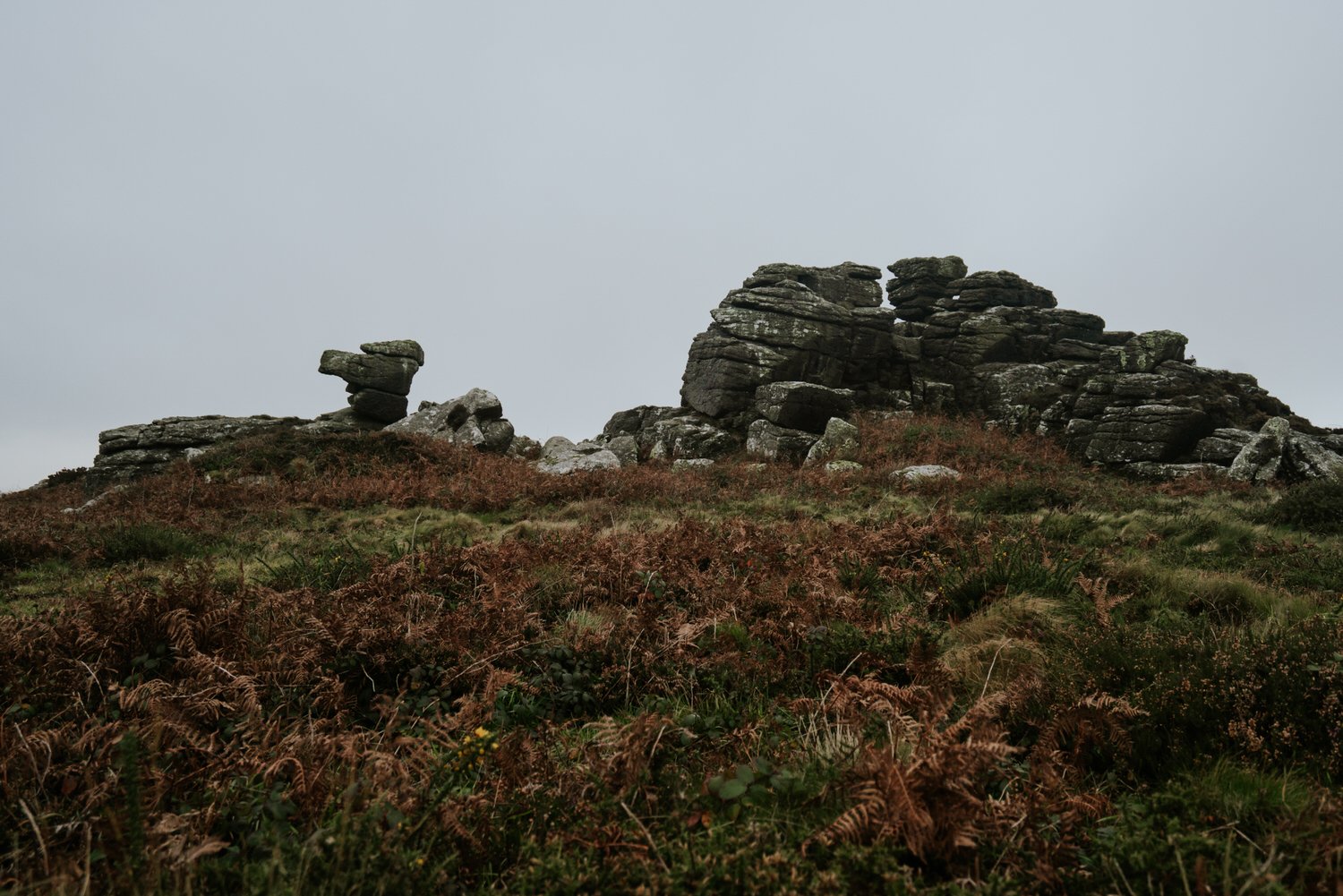 Mên-an-Tol consists of three upright granite stones: a round stone with its middle holed out with two standing stones to each side, in front of and behind the hole. When seen at an angle from one side, the stones form a three-dimensional “101”. The westernmost stone was moved and brought into a straight line with the other two stones sometime after 1815. The only other holed stone in Cornwall of this type is the Tolvan holed stone which can be seen in a garden near Helston . There is one other standing stone nearby, and six recumbent stones. Mên-an-Tol is supposed to have a Fairy or Piskie guardian who can make miraculous cures. Local legend claims that if a woman passes through the holed stone seven times backwards, on a full moon, she will soon become pregnant. Are any of our Brides prepared to test this out? 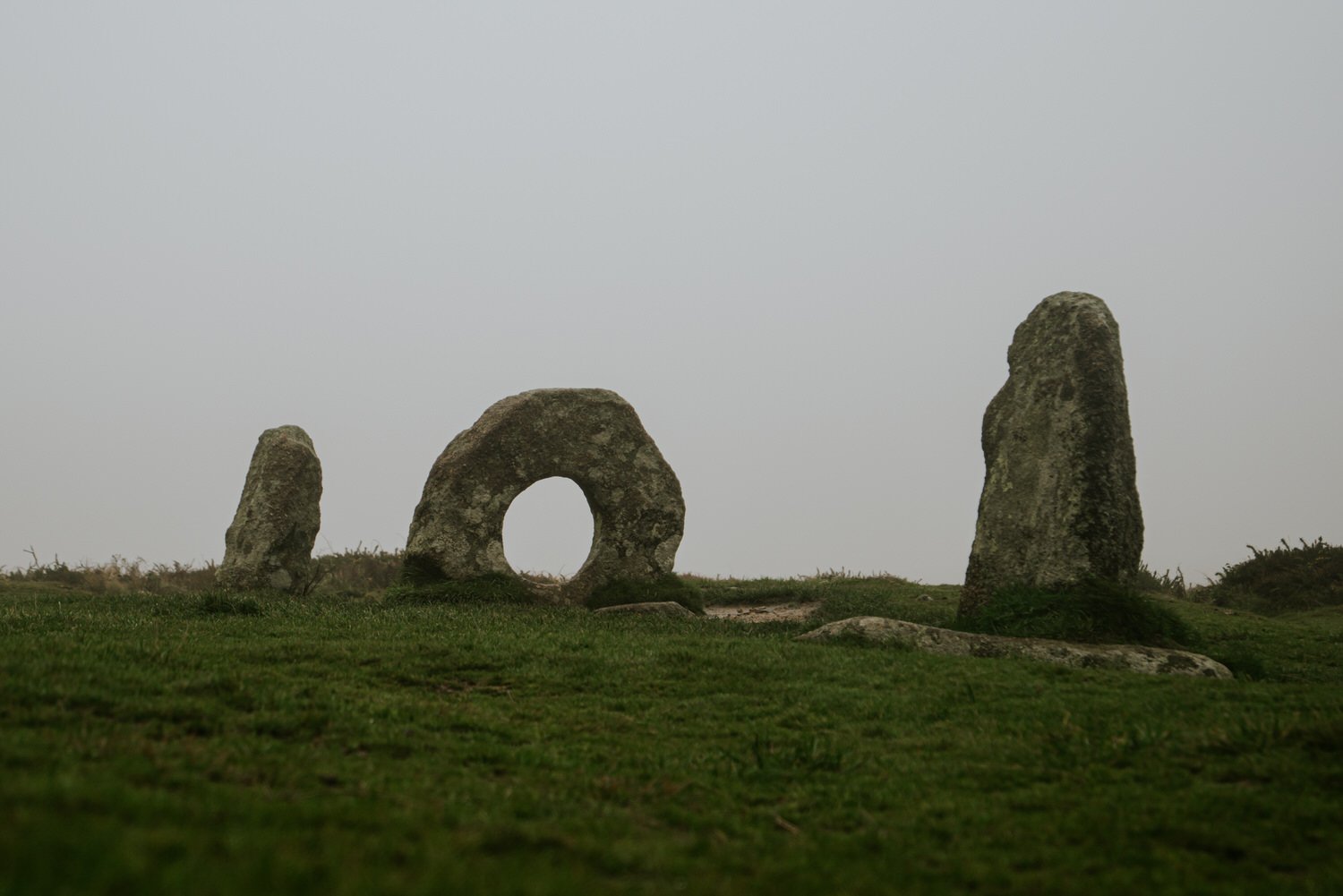 Boscawen-ûn was a place for ceremony and ritual. Quartz was seen as a sacred stone to the megalithic builders. The quartz stone in the circle may have had some significance relating to healing and perhaps the moon. The centre stone faces in the direction of the midsummer solstice sunrise, towards an outlying standing stone. The rising sun illuminates a carving of two axe-heads that lie towards the base of the stone. Cornish greenstone axes were traded with other tribes in England so this carving on the centre stone is probably a sacred symbol. In the other direction, the sun can be viewed setting between the centre and quartz stones at Samhain (Oct 31st), a pre-Christian festival, when viewed from a spot on the opposite side of the circle. If you are planning on having a Halloween Pagan Handfasting or a Midsummer Wedding, this is definitely the perfect Ceremony site for you. 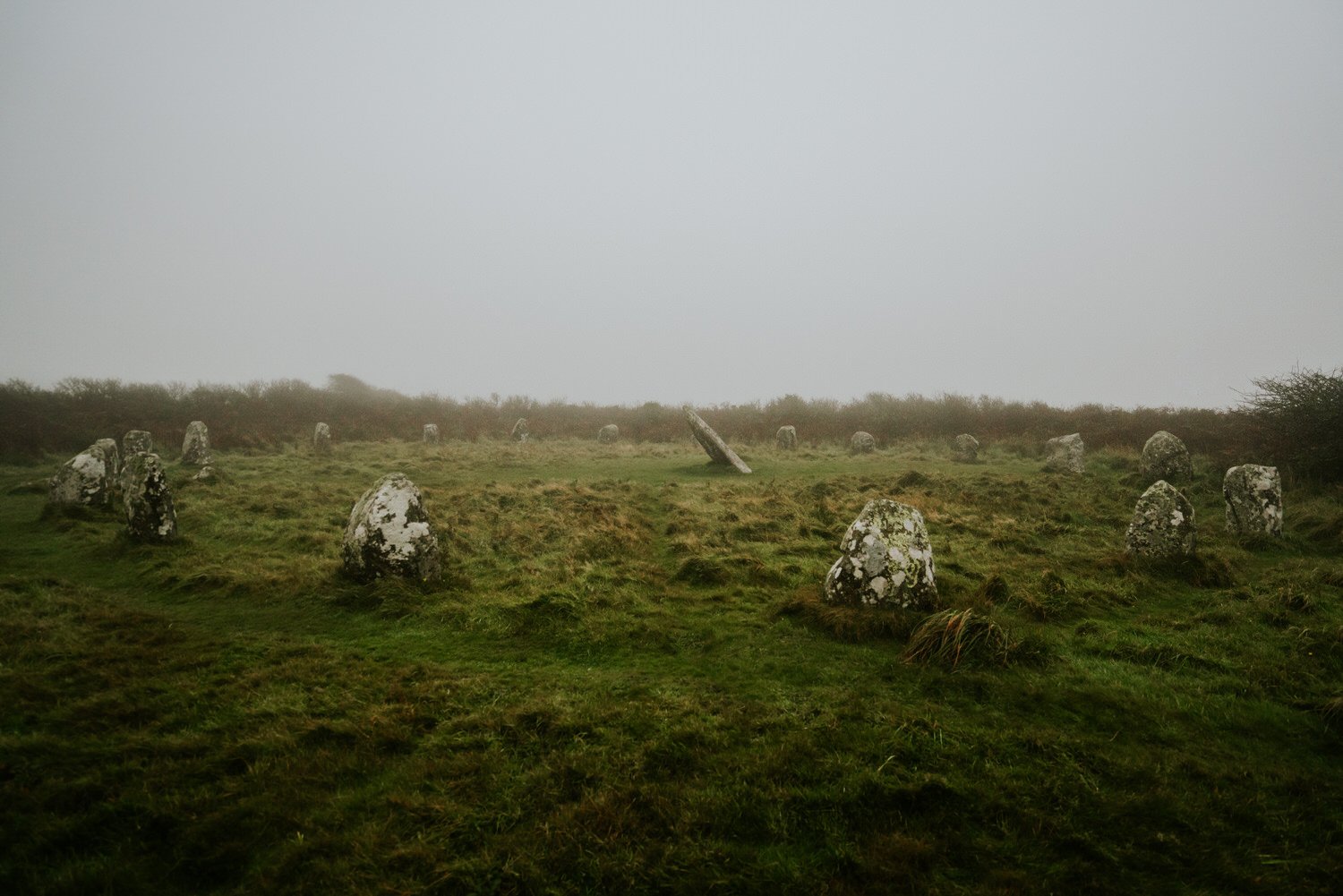 Carn Brea Castle stands near the top of the hill. It is built on the site of a chapel built in 1379 dedicated to St Michael . It was built in the 18th century by the Bassett family as a hunting lodge. It is built on the huge uncut boulders that make up part of its foundations, giving the impression of the building melting into the land. In the 1980s the abandoned building was converted into a Middle Eastern cuisine restaurant. At the highest point of the hill is a 90-feet high (27m) Celtic cross erected as a monument to Francis Basset . Just a bit further along the top of this site, there is a stack of rocks with a longer fallen rock which makes a lovely altar space on which to place your ceremonial items for your Wedding. 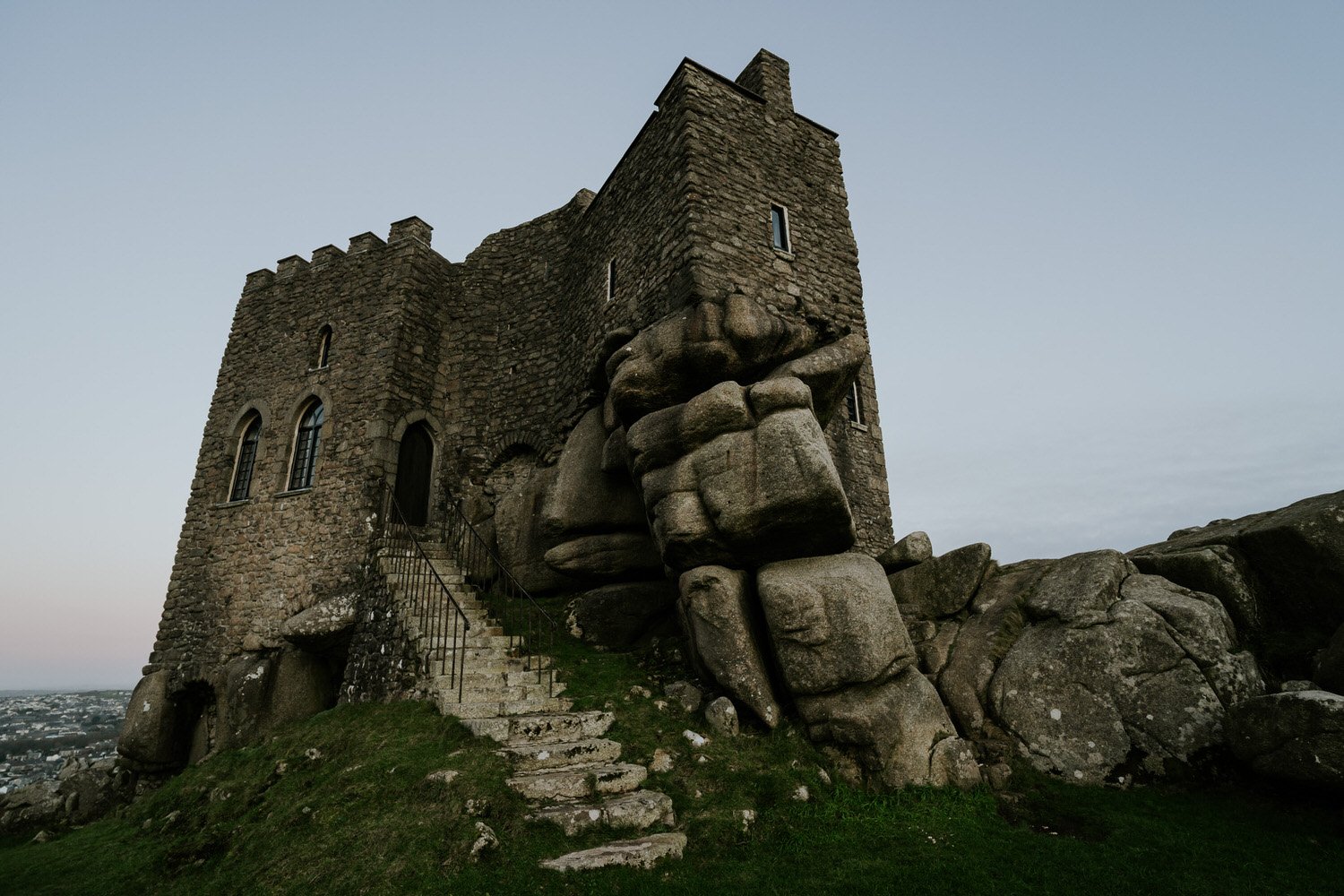 This quoit was probably covered by a round barrow . It is believed to have been built around 2400 BC, two millennia before the neighbouring Chûn Castle . It was a closed chamber with a mushroom-domed capstone . There is a cup mark on top of the capstone which is supported by four substantial slabs. There is evidence of an entrance passage to the south-east within the mound area. 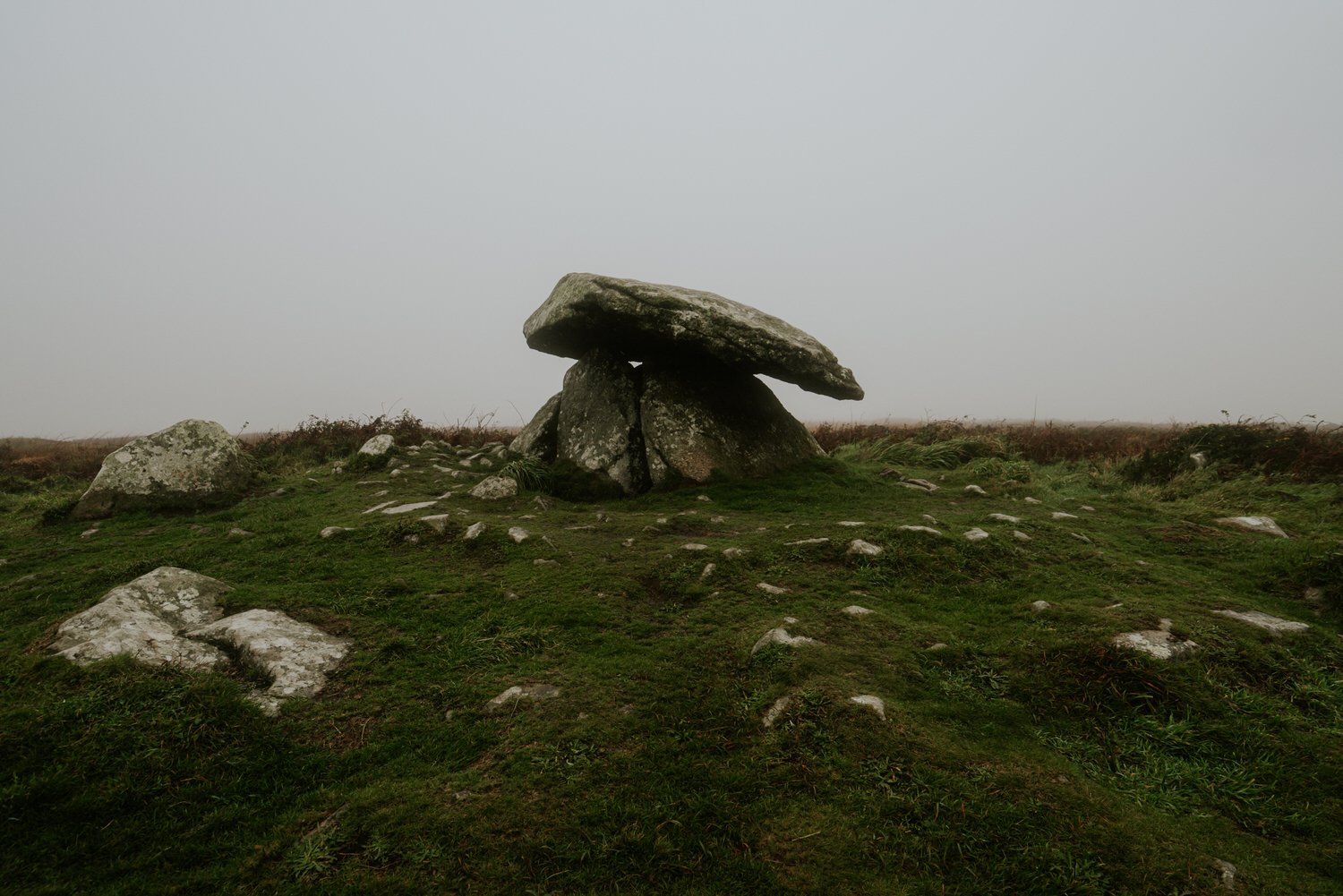 There are many other megalithic and archaeological sites such as Lanyon Quoit , Mulfra Quoit , Mên-an-Tol and Mên Scryfa nearby. The rocky outline of Carn Kenidjack marks the position of the midwinter sunset away to the south-west. As with many of these ancient stone sites, timing is everything as during the summer months they can be very busy. Sunrise or Sunset ceremonies work best here with the option of having some of your couple photos before your ceremony and before it gets too dark. 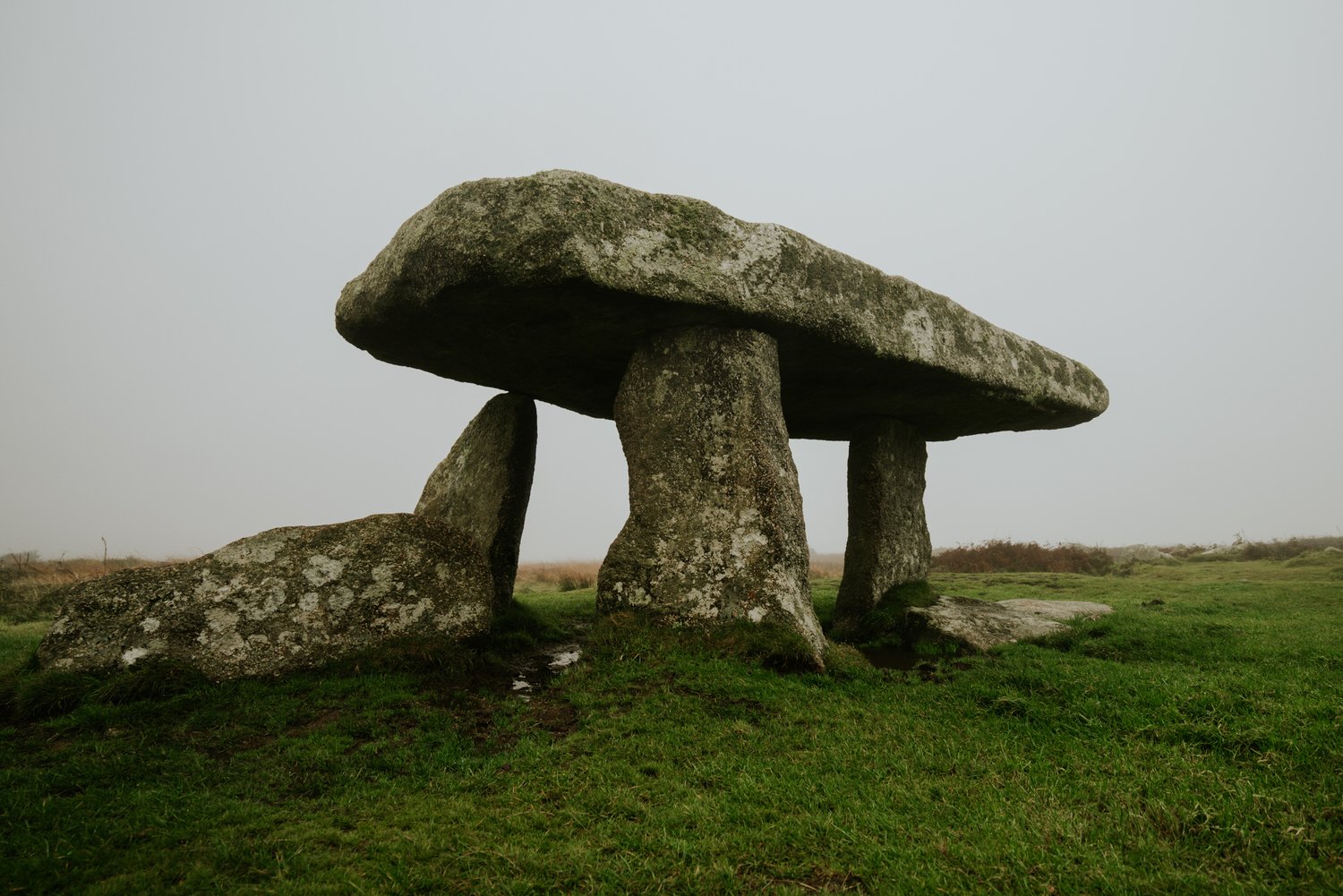 The site consists of a circle of 19 stones. The stones equally spaced, have a gap in the NE side for the entrance. The Cornish name ‘Dawns Meyn’ ‘dance of stones’ refers to the legend that nineteen maidens from a wedding party were dancing in the field one Sabbath eve by music from two pipers. As the night turned into Sunday they continued dancing to the wild music and were turned to stone for their impiousness. 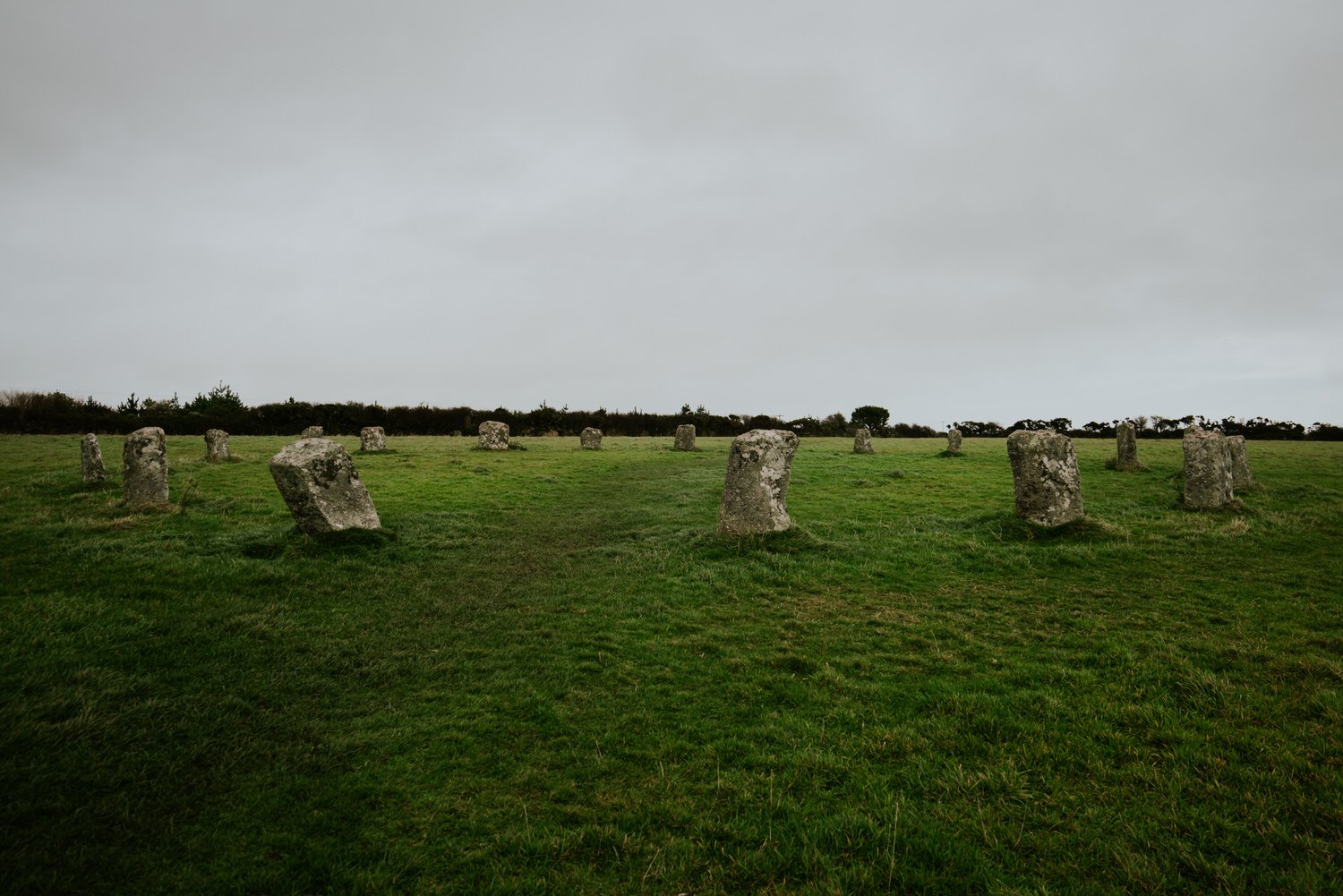 The Pipers now stand as two standing stones in a nearby field. Stone circles were places for ceremony and ritual. In West Penwith there are 5 stone circles that have or had nineteen stones. This relates to the 19 year metonic cycle of the moon and the sun. For ancient peoples, observation of the passage of the sun and moon and celebration of the Earth Mother may have been linked in ceremony and ritual here. If you are having an Equinox or Solstice Wedding, this is a great site to choose.

Madron Well has long been revered for its magical and healing powers. Even today strips of cloth can be seen tied to surrounding branches. People would come here in May at Beltane (the festival of fertility) to enter the water three times naked, circumnavigate the well clockwise three times and then rest nearby. A piece of cloth would be torn from their clothing if they were unwell and it was believed that as the rag deteriorated, they would improve. 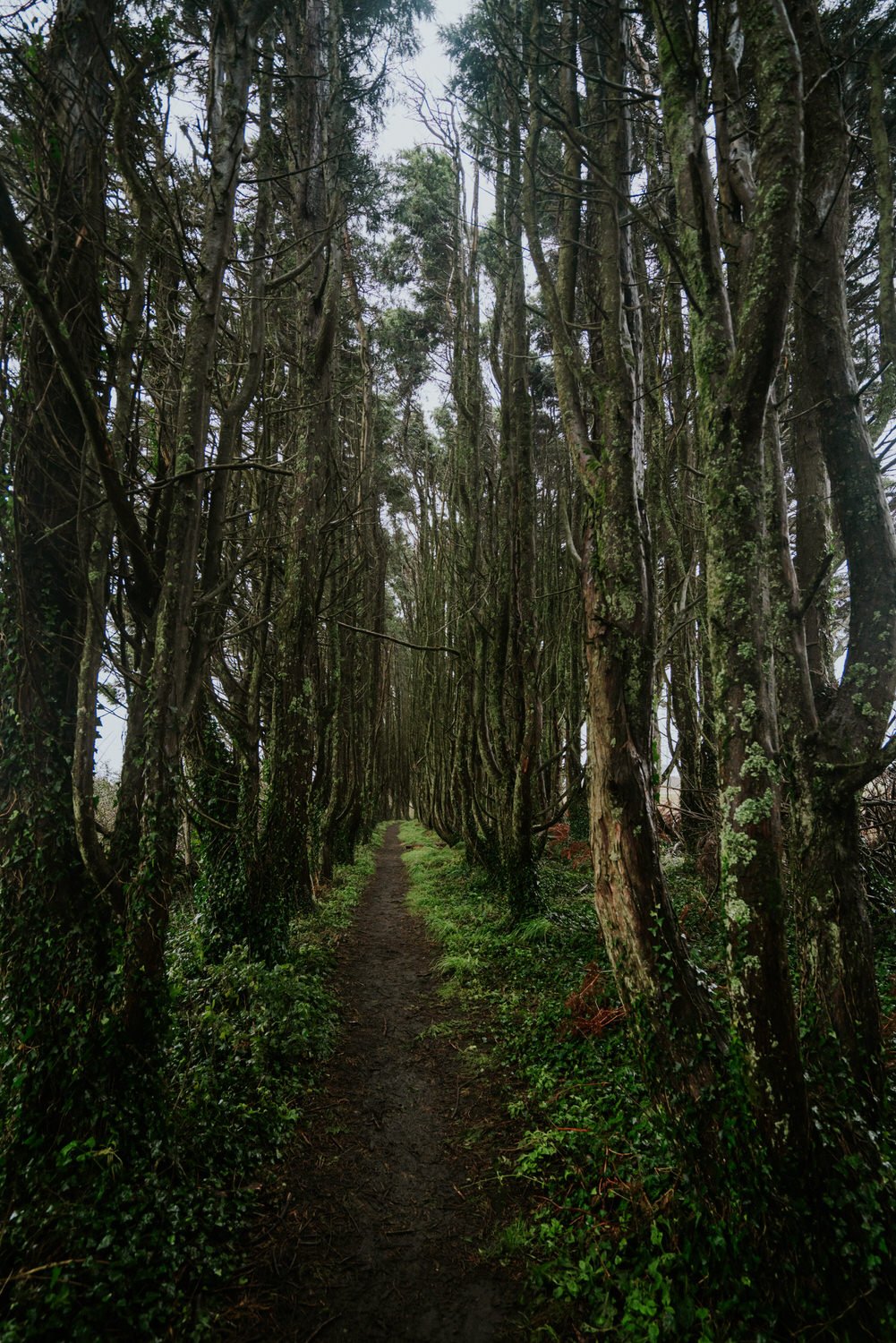 Another ritual was when local maidens asked how long they would have to wait to be married. They made a cross with straw, which they placed on the water. The number of bubbles arising would signify the years left to wait. There are ruins of a simple C12th chapel, with a doorway to the north, an altar to the east and a simple stone font in the southwest corner. This tiny, beautiful place is believed to be rooted in Pagan worship. This is a very special spot for a Spring Wedding and all the fabric rags blowing in the trees add to the playful energies surrounding this sacred Well. We hope you enjoyed this Blog Post about Stone Circles & Ancient Sites in Cornwall. 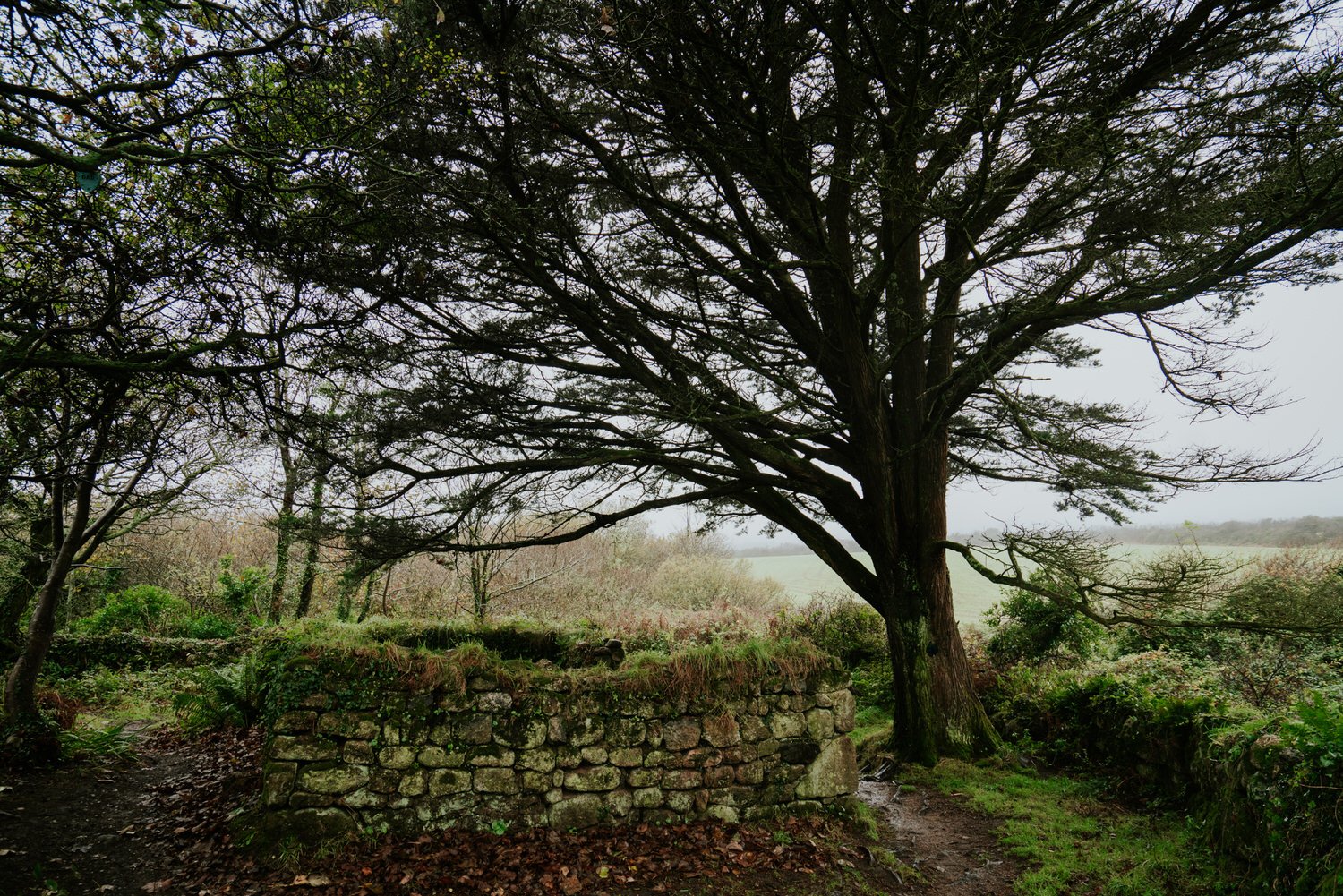